our team is enjoying a phenomenal few days at the 29th Texas Federation of Republican Women Biennial Convention this weekend! Let me tell you, it’s a great time to be a Texan. It’s also a great time to be a Paxton Patriot, because we just added another important team member to our ranks! 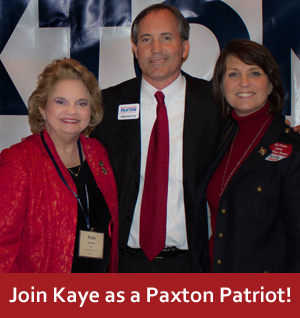 aye T. Goolsby, who serves as Statewide Grassroots Chair for Senator Ted Cruz’s campaign, has joined our campaign as Chair of the Statewide Leadership Team. (Pictured on left, along with my wife Angela on right.)

Kaye’s leadership in our campaign provides another major boost of momentum. And when it comes to leadership and experience, Kaye is in a class all of her own. Besides her extensive work with the TFRW she has served over 100 campaigns.

She has tremendous work ethic and integrity, earning respect wherever she goes. Her long-standing history with the party brings an incredible wealth of statewide relationships that will help propel us to victory. Whether supporting our campaign or carrying the banner for Senator Cruz, Kaye’s mission is always to defend family and freedom.

“Ken is a man of conviction and dedication. I always know where he stands and I trust him to fight for the issues that are important to the Republican Party. I look forward to introducing thousands of voters to Ken and his proven conservative record. I am proud to join his campaign to be the next Attorney General for the state of Texas.”

So much happens on the campaign trail that I simply can’t relate every story! But, as each day passes, more and more Republican leaders like Kaye, conservatives, and grassroots citizens who are just frustrated with typical politician types join our team as Paxton Patriots. (Did you catch our previous email about many other key leaders in Ted Cruz’ volunteer army joining our team?)

Our efforts to keep Obama and Washington liberals out of Texas is gaining momentum every day. Will you join us and help turn that momentum into a victory, for our values and our children?
For Texas,

And one P.S. from Kaye: “Please don’t forget to click here and join me as a Paxton Patriot today!”