Did you hear the news?

We just received the coveted endorsement from Texans for Fiscal Responsibility! TFR is the preeminent taxpayer watchdog in the state. This endorsement underscores that with each passing week, major conservative leaders and organizations, as well as grassroots conservatives, are uniting behind our campaign because of my decade-long, proven conservative record of leadership. 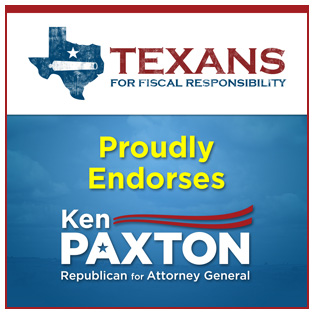 In their endorsement press release, TFR’s President Michael Quinn Sullivan said: “As a legislator, Ken Paxton has shown an unrelenting willingness to fight for conservative principles, while maintaining the utmost professional demeanor. Those same qualities will serve us well as the state’s next Attorney General.”

I’m honored and encouraged to have earned the endorsement and support of Texans for Fiscal Responsibility. For 11 years I have fought for the Texas taxpayer, standing for smaller government and responsible spending. As Attorney General, I will continue to champion conservative values that allow for economic freedom and prosperity against a federal government bent on controlling our lives.

Since they began the Fiscal Responsibility Index in 2006,
Ken Paxton has received an A+ or 100% in every legislative session!

And during this past legislative session, Ken Paxton was
the only Senator to receive a 100% rating from TFR.

The month of October has proven to be fruitful for our campaign! We won both last week’s Montgomery County Tea Party straw poll and an online statewide poll of statewide activists. We also added Senator Ted Cruz campaign veteran Kaye T. Goolsby as the Statewide Leadership Team Chairman.

Are you ready to join TFR, Kaye T. Goolsby, and thousands of others as a Paxton Patriot?