We’re pleased to welcome these five former United States Attorneys and Assistant Attorneys as the newest Paxton Patriots. From conservative grassroots leaders to watchdog organizations to former federal prosecutors, the Paxton Patriots are growing. We are gaining ground across the state. 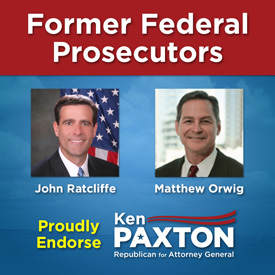 Read what they had to say…

Hon. Matt Orwig was appointed by President George W. Bush as U.S. Attorney for the Eastern District of Texas and earned the Director’s Award for Distinguished Service from the Department of Justice.

“As a former U.S. Attorney, I know how important it is to have an effective, principled conservative leader in the position of Texas Attorney General. Those who have worked with Senator Paxton are impressed by his keen legal analysis and ability to skillfully navigate complex issues.”

“I’m pleased to endorse Senator Ken Paxton. His clear record of commitment to constitutional principles makes him the only choice for genuine conservatives.”

“I have known and worked with Ken Paxton over 20 years and know him to be an individual of principle and integrity who places the interests of others above his own. His ability to think through complicated legal issues is unparalleled.”

“Ken Paxton is committed to public service, both in Austin and in his home community in North Texas. His additional commitment to conservative principles, knowledge of the law, and dedication to the State of Texas make him exceptionally qualified to serve as the state’s top law enforcement officer.”

Kevin Collins served as an Assistant U.S. Attorney in the Eastern District of Texas, where he earned special recognition from the Drug Enforcement Administration:

“[Ken Paxton]’s strong conservative principles are reflected in his eleven-year record of public service. I think he is exceptionally qualified to serve as Texas’ Attorney General.”