Friends, I’ve got two great headlines to share with you! See our press release below…

(McKinney, TX) – Demonstrating continued campaign momentum, State Senator Ken Paxton was today endorsed by Young Conservatives of Texas (YCT) in his bid to become the next Attorney General of Texas. Separately, Senator Paxton won the statewide straw poll conducted by GOPisForMe.com (an auxiliary of the Republican Party of Texas) with over 52% of the vote. 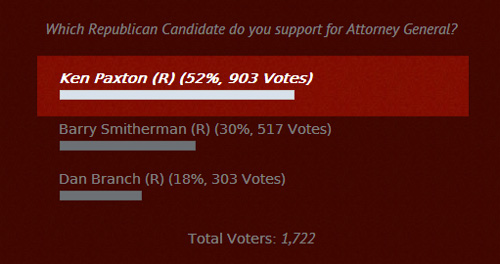 In their endorsement of Paxton, YCT State Chairman Jeff Morris said, “Our decision to endorse Sen. Paxton for Attorney General required no deliberation. Sen. Paxton has shown consistent conservative leadership in both the Texas House and Senate, and he will make a fantastic Attorney General.”

The YCT release continued, “Since his time in elected office in Texas, Sen. Paxton has consistently voted on his own conservative principles, often bucking his own party leadership. From positioning himself as the conservative alternative for Speaker of the Texas House during the 82nd Legislative Session, to fighting for legislative causes valued most by conservatives, Sen. Paxton is uniquely qualified and fully prepared to take over the Office of the Attorney General.” 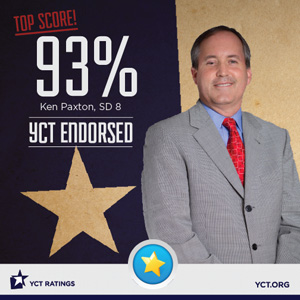 “Sen. Paxton has consistently scored among the highest legislators on our ratings of the legislature,” said Jenna White, YCT Executive Director. “He was not only the “Rookie of the Year” in the Texas Senate during the 83rd Legislative Session, but he also produced the highest score of all members of the Senate for the session and among current legislators, tops our Historical Honor Roll with a lifetime rating of 95.”

“Senator Paxton is the only candidate in the race that Texans can vote for and know with certainty that the next Attorney General will be a fierce advocate for Texas when it is necessary to take on the federal government,” commented Morris. “Greg Abbott has built the Office of Attorney General into a last best defense for state sovereignty and Ken Paxton is the only candidate who can and will take up the reins and continue the good fight.”

Young Conservatives of Texas is a non-partisan organization that has promoted conservatism at universities across the Lone Star State for over three decades. The State’s most active political youth organization, YCT is composed of hundreds of members and alumni who participate in the full spectrum of politics. YCT issues the most respected ratings of the Texas legislature and is the only conservative group to have done so without interruption over the past 20 legislative sessions.

Duke Machado, founder of the organization and host of the GOPisForMe.com statewide poll, said when announcing the results, “Ken Paxton, according to grassroots voters, is the clear choice for Attorney General, coming in with 52% of the votes…. Paxton obviously resonates with the grassroots voters in Texas.”

The poll was launched on October 17, 2013 at 11:15 pm and concluded yesterday at 5:00 pm.  The poll included races for Governor, Lt. Governor, Attorney General, Comptroller, Agriculture, Land, and Railroad commissioners. Over 1700 votes were cast in race for Texas Attorney General.