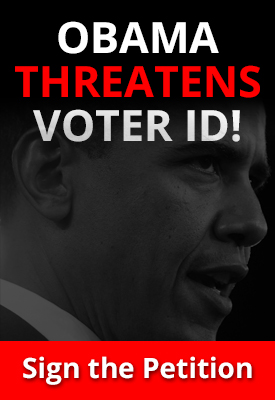 We have a message for Eric Holder and the Obama Justice Department: Texans can govern Texas!

This politically-motivated lawsuit is an insult to the state sovereignty of Texas. Our elected officials, supported strongly by Texas citizens, have every right to preserve the integrity of our elections without the heavy hand of Washington intervening in our affairs.

I strongly support Voter ID and stand with Attorney General Greg Abbott and all Texas conservatives in opposing this colossal waste of our federal taxpayer dollars. Sign our petition if you oppose this effort by Eric Holder and Barack Obama to undermine the integrity of our elections!