Will you stand with me?

Friends, it’s a great time to be a Texan.

With our track record of job creation and economic growth here in Texas, you would think that Washington would leave well enough alone. Let Texas be Texas. But as you know, President Obama and the federal government feel the need to micromanage our state.

We need bold leadership to hold the line against our out-of-control federal government.I am extremely grateful to Attorney General Abbott for his tireless efforts to push back on Washington as it continually attempts to encroach on our rights and liberties.

And now that he has announced his plans to run for Governor, it’s time for another leader, a proven conservative to follow in his footsteps. That is why last Thursday, with family, friends, fellow Republicans, Tea Party Patriots, and dedicated conservative leaders, I announced my candidacy for Attorney General of the great State of Texas. 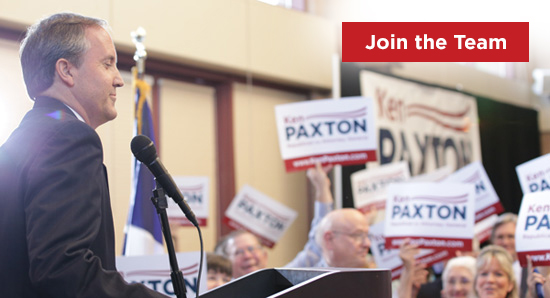 We have a loud and clear message for Barack Obama: Mr. President, Texans will govern Texas! It is imperative for the sake of the nation that Texas remain strong by continuing to forge our own path based on liberty, freedom, and respect for the Constitution.

During this campaign season you’ll hear lots of promises to stand firm against Washington. The difference is, not only do I mean it — I have the record to prove it. For more than a decade, I’ve actually taken the tough votes in the trenches for our values. And I’m honored that, as a result of my record, I have earned the support of some of Texas’ most dedicated conservatives.

This is the line in the sand. Texas is the last, great hope to resist oppressive federal intrusion and the office of Attorney General is the front line of defense.

If you will stand with me, if you will pray for me, if you will share our story with all of your friends in Texas, together, we will ensure that the Lone Star State remains a beacon of freedom and liberty to the nation.